After GuHyun left it was time to visit Musood who lives in Soura, an eastern suburb of Srinagar. 13th July however turns out to be Martyr’s Day . So the town was in a shut down stage with nearly all businesses closed down and many streets barricaded. The army and police were everywhere and looked a little tense. It was into this foray that I had to get through if I was to stay at Musood’s that night. So I hired a tuk tuk (auto- rickshaw) after dropping off GuHyun at the bus depot and away we went.

The driver was still only half enthusiastic after we agree on a price of 300 rupees which is 50% more than it would have been otherwise. However it wasn’t long before we had our options reduced. To get to Soura you have to go normally through the old city. According to the driver that wouldn’t have worked so he chose a longer route but never the  less we ran into road block with barb wire across the road thus effectively stopping us.

The military were adamant that we should go back but by this time I had decided that I would try to circumvent their decisions. I indicated to the controlling officer that I was going to the main hospital SKIMs which I new was convenient being located near Musood’s place. This and perhaps the fact that I was a foreigner seem to work and we went on. However we came to another blockage and this time they told me to get out and walk the rest of the way. No way was I going to do that as empty streets, barb wire and a heavy military presence was giving me a creepy feeling. More explanations to the officers were given and finally permission was given to allow us to proceed to the hospital. Thank goodness I didn’t walk though as it was a very long way.

Soura is a relatively new suburb with many large dwellings in some cases of almost castle like proportions. Concrete is the new median of construction and you won’t see the traditional wooden building anywhere here. Perhaps the only similarity with the older traditional wooden buildings is the high pitch roofs often looking like they are flimsily attached to the top floor of the building. In former times and perhaps still in some places in Soura they are still used for storage of fodder crops etc to be fed to their animals in winter. Lots of construction, roads in a constant state of repair and very hazardous road rules, high and unusable footpaths which are so ridiculous no one uses them and nearly every house has a high wall and a large gate I suppose to protect its occupants.

For me at times it was easy to lapse into a mindframe that you were at home in Australia. For much of the time I  might not notice the differences and complacency would set in. But things are different some more subtle than others. I am trying to give you some understanding of that picture.

out the door with traditional materials in with concrete

Perhaps the main difference between life here and Australia is the strong relationship people have to their faith. In Kashmir generally and in Srinagar particularly the overwhelming majority of people are Muslem. Their faith in these parts is not a passive thing worn behind close doors it is out there everywhere. For myself it is such a new sensation and for someone who has never been particularly religious it could sometimes be daunting. To hear the Mullahs calling people to prayer many times a day and especially during Ramadan we would probably find this intrusive in Australia and not tolerate it. 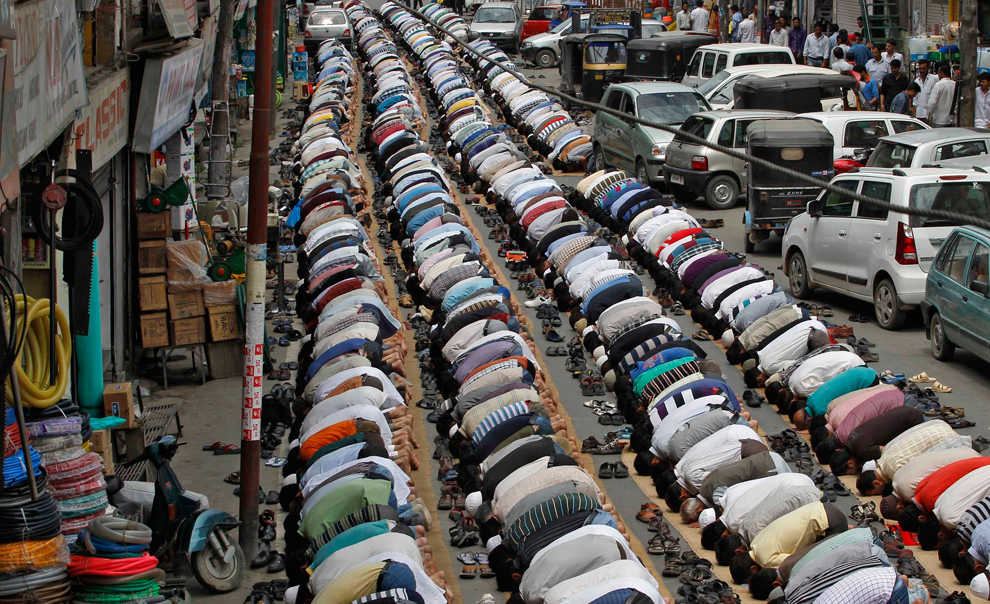 But here it is a binding thing and somehow creates a cohesiveness. Not being an expert on religion I had better not go on as I will obviously make mistakes in my interpretation.

As I may have mentioned in one of my previous posts I hadn’t really explored Kashmir until last year.only given me opportunities to see this beautiful country but also to glimpse their peoples and their very strong relationship to their beliefs. But like nearly everywhere in the world not everything is rosy. In Kashmir it is well documented that Kashmiris don’t like the way they are treated by their masters India. And like so much of the Muslim world there are conflicts and sometimes explosive ones between Sunnis and Shiites. Whilst I can’t say I directly some of these conflicts I did experience some tense times which might have gotten out of hand.

It is wonderful being in a family though where you can live normally and talk about many issues such as alcohol, women’s rights, arranged marriages, freedoms and liberties of all sorts. Sure my main difficulty was the language barrier but I have had so much more opportunity to become more acquainted with my friend’s lives only by being in a home-stay .  This has turned out to be one of the highlights of my trips to Kashmir.

The Shah’s live within walking distance of SKIMs which is one of Srinagar’s new public hospitals. I was ready for a rest and what a good place their home became for me. There are plenty of rooms at their home and my room is upstairs. Their dental practice fronts the main road. The Shah seniors live downstairs and Musood and Ramona are not  far away on the same floor as me. It seems to me that the house enjoys spaciousness and this is largely due to the lack of furniture. No lounge-chairs, no tables ; to be honest not much furniture at all. A slightly different feature is that the bedrooms enjoy beds which is not always the case in other Kashmiri homes that I have visited. But the comfortableness  comes from the carpets and pillows which are in most rooms. You don’t need to fight for a chair just grab a place on the floor. Feel a bit tired then just lie down, no one cares and it is half expected that you may drop off for a while and rejoin the group when you feel lkie it.

The kitchen is a bit different to western kitchens. 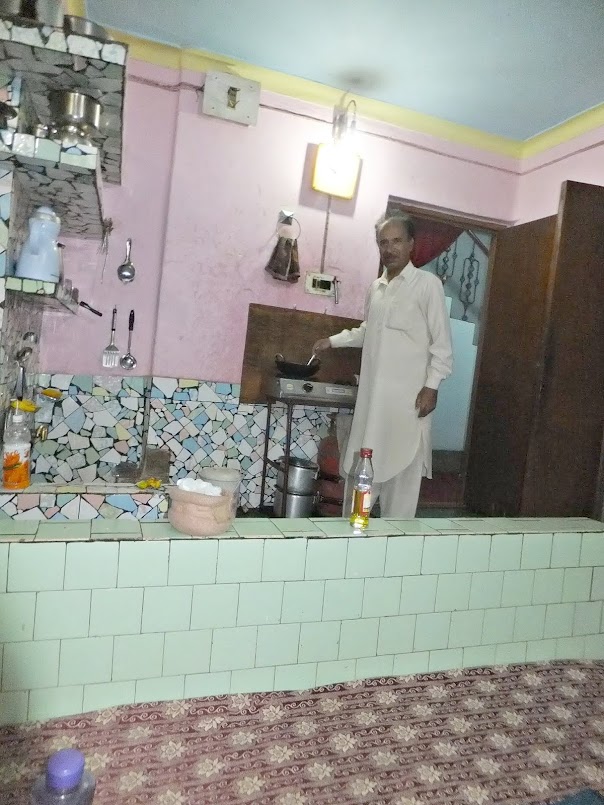 No ovens and in Srinagar stoves are gas although sometimes very suss wiring is used for heating. I often wonder why more people are not killed as very primitive live wire connections are often used and sometimes very close to water! The Shah’s home is not only spacious but has lots of windows and so feels very light and airy. However I can’t imagine how they get through winter as many houses have very little in the way of heating.

My arrival turns out to be a week before Ramadan. So we did a little celebrating for Ramona’s and Musood’s new baby. Ramona wasn’t as visible this year as it is common for the mother to spend the first month with the her birth family. So in a way Musood and I were sort of born again bachelors. We are fortunate in a way as we both like playing with computers and first up always grabs Musood’s dongle so that we can get on the net. Of course the other person is aware of this with rendezvous occurring any time of night and day. My main legitimate reason for being with Musood has been to review the work that Uplift Kashmir has done since it became official just after I left last year. Uplift Kashmir is an organisation set up to help needy individuals in Kashmir improve their health outcomes. It has no affiliations with any political or religious organisations. Musood is a very determined man and has managed to engage the interest and support of many dental and medical professionals based in Srinagar. They in turn have many connections with the facilities necessary for treatments. This arrangement and the voluntary nature and enthusiasm of the members shows great promise at this stage.

An ordinary day has two chapters meaning before Ramadan and during Ramadan. Before Ramadan not that much different to what we see in my own home. Three meals a day either at home on somewhere in town.  Lots more food available and certainly more street activities. I won”t dwell on these days  but will mention that things were different during Ramadan not only in Srinagar but also in the rural areas that I visited. What I noticed most was the early morning call to prayer maybe at 4am. You wouldn’t be able to sleep through this. This was an important time for all as this is the last chance to eat before daybreak. My impression of this time is that people were not so sociable at this time. They ate simply to fill themselves up with little attention paid to what they ate. It was I suppose seen as a necessity and a mechanism to get through the day. This also included liquids which would have to tide them over to the end of Ramadan. For me I never bother to join them even though I couldn’t help waking up. Sometimes as I said before Musood would come in for a few minutes and we would chat about whatever but generally we would all fall asleep again for a couple of hours. I guess my Ramadan program then took a different direction to my hosts. I would get up at about 6am and make a cup of tea and maybe some toast with the great Kasmiri tomatoes. Actually I saw it as a privelege to be able to use the kitchen and make something more familiar to me. Then a quick dash into the loungeroom to watch a little of the Olympics. Not really an Australian slant but never the less very interesting to me to hear it from an Indian point of view with the very patriotic commercials from Hero of motorcycles, bicycles and more fame. Indian people particularly those outside the main cities don’t seem very interested in the Games. Not at all like the response people have towards any cricket matches. I think this is because to date these other sports are not promoted and people are thus not familiar with these other sports. I don”t think it will be long though before India realises that the sports just like the tremendous success they have had with 20/20 cricket can be great money spinners.

I keep thinking of the many unsaid stories about Soura but one that should be mentioned is the entrepreneurial  spirit which exists that not only allows the people to survive but again allows others to prosper. These many small businesses can be found on almost every corner. Those of my generation might remember the corner shops, and at the next level the cluster of shops which might be the local shopping centre now all either extinct or likely to become extinct due to the ingress of the likes of Coles and Woolworths.

Here in Soura there are no giants just smaller shops. Chickens at one shop ready to be killed and dressed in front of your eyes, a tailor, a barber, small goods grocery store, fresh bread, a milk and soft cheese shop next door, then a welding shop and so the list goes on often repeated so many times that you wonder how they all survive.Further up the road as the businesses multiply into a more congested and a main road area street stalls start appearing on the road side mainly selling fruit and vegetables. Traffic flow becomes all the more restricted as people take command of the streets and out of all of this the people satisfy their needs both in substance and soul. It is these things which I miss. It is such a shame that in Australia shopping has become so sterile.