Fertiliser was spread on all paddocks today.  We have a rotary spreader with an agitator built in . The blend used was that recommended by  Impact based on the  soil sample taken from one of the rows of the Eureka Paddock orchard. The same mix was spread over all paddocks at about 300-400kg/ha.  The blend used was adjusted as follows the trace element manganese sulphate was removed from the mixture, the zinc sulphate  and boron additions were doubled (38kg/t,76kg/t respectively).  I decided to do this as zinc has been consistently low and the boron form is slow release and therefore unlikely to cause any toxicity problems.

Today has also been a tomato planting day. We use the old strawberry rows which were mounded and covered in plastic to plant the tomatoes in. All the tomatoes were planted in the one area this year. This is the paddock we call the Greenhouse paddock.

Unfortunately this section  can get waterlogged particularly near the bottom of each row which is low lying. Lisa prepared the rows yesterday turning over the soil in the existing holes and adding compost. 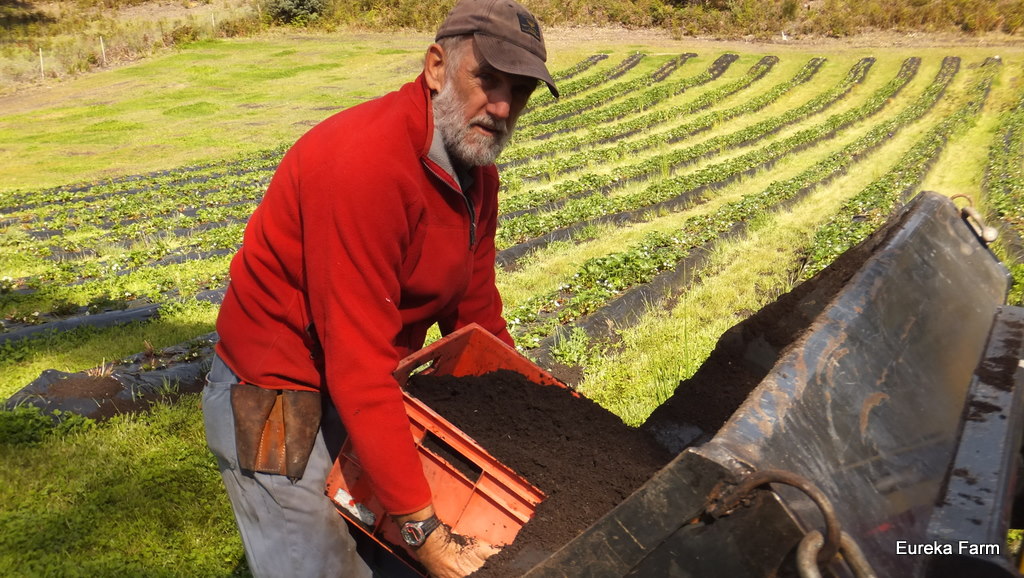 Today we planted two rows of field tomatoes variety K2 and 11/2 rows of roma tomatoes. About 300 tomatoes I would guess. Keith Mason generously grew the seedlings for us from his own seeds. Both Keith and John Bushing used to supply us with tomatoes which we use mainly for cooking. But both gentleman have now retired so we thought the easiest situation would be to grow our own.

Last year we tried out the idea on old strawberries in the Hill Paddock. Unfortunately we didn’t give them much attention with the result that much of the fruit became diseased and the plants were not fed a great deal.